Getting Ready For Wisconsin Bow Hunting – Preparation Is Fun!

This blog post is a just a little update regarding the Wisconsin Crossbow Deer Season.  Hunting preparations for this season actually started for me back in Winter/Spring 2017.  That’s when I started poking around the woods where I hunt looking for deer activity.

Then, throughout the summer and into Autumn I of course spent some time shooting my crossbow.  It’s a Barnett Vicious reverse draw.  You can read a review I wrote about this particular crossbow here: Barnett Vicious Crossbow Review.

I also went for a few short hikes into the woods and did some searching for potential new hunting spots.  I always gun hunt in the same woods using ground blinds, but when I bow hunt I tend to move around year to year.  Learning to pattern deer is key to bow hunting.  Things can change from year to year, and do.

Both the archery and crossbow seasons  in Wisconsin run from September 16, 2017 until January 7, 2018.  Many hunters hit the woods right away and hunt as much as they can as soon as the season opens.  I don’t do that.

It’s still pretty warm when the season opens.  Temperatures can hit up into the 90s that time of year.  Usually temps are in the high 70s and into the 80s, but to me that is just too warm to hunt.  Harvesting a deer at those temperatures means needing to get them processed fast, because meat will spoil quickly.

Usually around mid to late October temps will drop down into 50s and 60s.  It’s still warm and you have to worry about meat spoiling, but you don’t have to rush as much as you would if temps were in the 80s!

Of course with the onset of November temps can easily start to get down towards freezing.

I like to bow hunt at the end of October.  I usually don’t even go hunting until the last week, unless the temperatures are cooler before then.

Usually by the last week in October temps are much cooler, and the deer are moving around a lot more during the day.  The deer mating season, the rut, is usually in what is called the chasing or seeking phase.  This is when bucks are roaming around looking for does, and does are roaming around trying to get away from bucks, as they are not yet ready to mate.

Some people call the phases of the rut different things.  Here is how I break them down by name and time of year:

Of course the phases can be early or late, but usually not more than by a week or two at the most.

After reading the various phases above you can see why I like to hunt that last week in October into the first week of November.  Usually deer are moving around more during the day, during legal hunting hours when I am the woods.  Temperatures are cooler too.

Preparing For My Upcoming Hunt!

Okay, so I took some time off from work in the very near future, just several days away from now.  I’ve been putting some arrows downrange with my Barnett Vicious, and in my spare time keeping an eye on the areas I plan to hunt near my cabin.

But what else do I need to do as far as prep?  I’ll tell ya!

Wisconsin has had baiting bans off and on over the years.  Some bans were dependent on the county or deer management zone you hunted in.  Personally, I never did much of any baiting.  Some hunters like to put out corn, apples, or any number of things such as Deer Cane.  Some hunters create food plots and grown specific organics that deer crave.

All is done in an effort to maintain deer in the area you plan to hunt.  Baiting can draw deer in, provide them with nutrients to help them grow and be healthy, and for some hunters help the bucks with their rack potential.

Like I said, I don’t really bait.  However, this year I did buy some small brick size animal mineral licks and placed them in the woods near one of my hunting areas starting back in August.  I have kept an eye on the licks when I went out to do followup scouting, and found that the deer have located the licks and have been working on them.

The last couple weeks when I have gone into the woods to check my stand areas I would take a rag and tie a long piece of string to it.  I would then apply a small amount of Tink’s Doe Pee to the rag.  When walking into my stand areas I would hold the other end of the string in my hand and drag the rag behind me along the ground.

Even though I am not hunting, just checking my stands and the area around them, I still drag that doe pee rag behind me.  It’s a deer scent.  Deer in the area smell it and have time to get used to it before I actually use it hunting.  What it does is create a calming effect for deer.  They smell that doe pee and my own human scent together and get used to both being around at the same time.

When I go into the woods in several days to actually hunt, I will use the same Tink’s Doe Pee to drag behind me with a rag.  Once at my stand I will tie that string and rag up to a shrub or tree a few feet off the ground, probably twenty yards to the left or right of my blind.

If looking for more information on deer attractants and when to use them, check out my blog post about ‘public land deer hunting tips‘.

First and foremost always hunt the wind.  If you do good scouting ahead of time you will know what direction the deer are traveling when they move between bedding areas and feeding areas.  Never hunt with the wind blowing from your stand area towards where you know the deer are going to be traveling.  They will smell you, and avoid you.  Always position yourself down wind, facing into the wind, of where you expect the deer to be traveling. 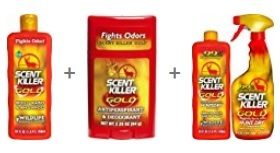 Scent killing products (by Wildlife Research) are a huge rage these days, and they can help a lot to kill your smelly human stink that deer hate and avoid.  However, all the scent killing products may not be enough to mask your odor from deer.  Use those products, but don’t rely on them to make you totally undetectable.  Be smart, and always hunt the wind.

Now, with that said, this year more than any other previous bow hunting year, I will be using scent killing products.  Other hunters swear by them and use them in conjunction with hunting the wind.  As a ground blind hunter, they should provide me an extra bit of cover scent protection.

Specifically I use Scent Killer products, such as; antiperspirant deodorant, body wash, laundry detergent, and the clothes spray.  In the past I used just the deodorant and the clothes spray.  I guess it has worked.  I’ve got deer and they didn’t seem to detect me.  The stuff is not that expensive, so I went all out this year and am utilizing all those items mentioned above.

Curious to see what I am using, check out Scent Killer products here.

Most bow hunters use deer calling devices when they hunt, and I am no different.  I have a couple that I carry with me, but I tend to not use them much at all.

However, this time of year, in the weeks prior to my hunting vacation week I do spend time practicing with them from the comfort of my own home.  I will watch a few YouTube videos on the actual calls I have, and spend a little time every couple days using them so I am familiar with their use.  In the past I have used a grunt tube to get the attention of bucks and does on the edge of my field of vision to draw them in closer.

Used sparingly, I think they can help bring deer in, mostly out of their own curiosity to see other deer.

I have owned and used the Buck Commander Flextone call for four years now.  It can do a variety of calls for both doe and bucks, young and old, for all phases of the rut.

I put in my time scouting.  Picked out a few areas I want to hunt.  One area in particular I have paid close attention to and am eagerly looking forward to hunting that spot.  All hunting spots I have are on public land.

I’ve been practicing with my Barnett Vicious Reverse Draw Crossbow off and on all summer and into Fall.  I’m consistent with my mechanical broadheads, confidant in my shooting abilities, and know my limits.

During my stints in the woods checking my hunting areas I used some non-estrous deer pee cover scents and put out a couple small brick sized mineral licks.  Deer should hopefully be used to my lingering smell (off and and on) in the area, as well as that hopefully now familiar doe pee scent I used.

Next week, before I load up my gear and head to my cabin for an extended deer hunting vacation, I will be washing a couple pairs of clothes for deer hunting in special scent killing detergent.  My showers at the cabin will include scent killing body wash and deodorant.  And finally, I will also spray down my clothes and gear with some of the scent killing spray that dries fast.  Overkill?  Probably, but I’m going all in this year!

I’m ready.  Temperatures are going to be down to where I like them when I hunt deer.  The ‘seeking phase’ and into the ‘lock down phase’ should be going on, so deer will be moving around, and hopefully able to be pulled in with some fresh scents and light deer calling.

Getting ready to hunt, all the preparation that goes into it, and the planning and checking and rechecking my gear… it’s a lot of fun.  The best part is actually getting out into the woods, surrounded by nature.  Solitude.