Sterling Oaks – A Cabin In The Woods

If you are lucky enough to own a chunk of land and to have a cabin on it… well, you are pretty darn lucky.  I must be lucky.  Of course hard work, time and effort had a lot to do with it too.

Along with a few cousins and uncles, I own part of ten acres of land on which sits a wonderful off grid cabin.  All around the land is thousands of acres of public land.  It’s very easy for me to admit that I am fortunate.

We run the property as an Limited Liability Company (LLC).  The property and the cabin that sits on it is 100% paid for.  We collect dues from the owners, family members, in order to cover taxes and maintenance.  It is a very well maintained property.

Completely off grid, it does have solar and a large battery bank.  We can run lights, water, inside shower and plumbing into a septic all off the solar.  And to be clear, while we do have modern plumbing… NO TV’S ARE ALLOWED!

An Off Grid Cabin With Some Pleasant Comforts Of Home

I can imagine you are getting a sense for the type of cabin I own along with my handful of other family members.  It’s a place to retreat to in order to get away from the grind of modern daily living.  It’s secluded and beautifully quiet.

We can heat it with natural gas or a wood fireplace.  It has a gas powered cooking range and oven.  The lights of course are powered from the solar system, as does the well and the plumbing.  A generator house is located outside, and if anybody wants to haul up a generator they certainly can and plug it into the main house, but it’s not needed. 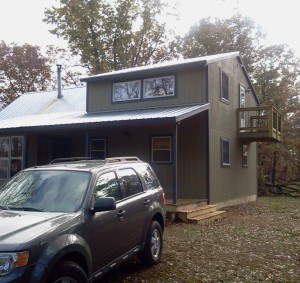 Otherwise, when not in the midst of the Wisconsin deer gun season, which last only nine days, the place is sparsely used.  Sure, people came and go, but it’s not unusual to have the entire place to myself for several days.

A Slice Of Heaven In The Big North Woods 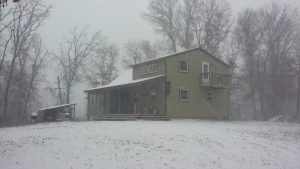 There is plenty to do around the cabin.  No need to travel far.  A few miles away is a scenic and historic river for canoeing and fishing.  Hiking can be done just stepping out the door, but there are also some great trails in the area for those wanting to follow a path.

Of course there is hunting as well.  And bird watching, and animal watching, track identification, scouting/exploring, photography, horse riding, scenic sketching… you get the idea, lots to do… or not do; such as read pulp trash novels and take naps.

And while the cabin is cozy for spending the night and relaxing, camping out in the woods is as easy as tossing a pack of gear on your back and heading out any direction off the deck.

Last year I created a few ‘treasure maps’ for the wee little kids in my family to follow and learn compass work.  I stashed some goodies out in the woods and they had to find them via their maps.  Aside from teaching and passing on outdoors lore to the younger generations, those treasure maps were a lot of fun have a firm spot in my memories.

How Did Sterling Oaks Come To Be?

My family hunts.  Not so much trophy hunters, but because we enjoy the outdoors and providing wild game for our tables.  For many years, before I was old enough to hunt, it was always a challenge to find places to go for my many uncles and my father to hunt.  Sure, public land was around and they used it.  But the dream was to someday own a slice of land and build something on it for all in the family to enjoy.

My grandparents for a long while owned a second home on a lake in Northwest Wisconsin.  Not far away from the home was a large track of public land.  For many years my family of hunters would gather and use my grandparents lake home as a base for their hunting activities.

Then one year, when I was eleven, just before I could legally deer hunt alone in Wisconsin, my father bought a piece of property in the middle of the public land my family enjoyed hunting on.

My grandparent’s sold their lake home and that same year my dad gave the ten acres he bought to share among his siblings – as long as they came together to build a cabin on it themselves, that was open to all the family to use.

They all agreed.  And history was in the making.

Among my father’s siblings was an architect, an electrician, and those familiar with building in general.  So it was a matter of gathering the resources and building a small cabin.  Over several weekends of the summer and fall on 1987 my family came together, driving north for a couple hours to the property, where we all worked and built a small cabin.

Originally it had one small bunk room, a kitchen, a loft, and a dining/living room.  Small and cozy.  No well, no solar, just a gas furnace and lights, and an old wood burning cook stove – that old stove baked the best bread.

My father’s siblings all paid dues to pay off the land debt, and several years later they did just that.  They owned it all free and clear.  But as the years rolled on, with more youngsters coming into age starting to hunt, it became evident the cabin was too small to comfortably manage all bodies showing up to use the place during the peak hunting week.

It was about eight years ago that my father and his siblings decided to make a major upgrade to the cabin, and at the same time they decided to pass it down to the next generation and those to follow.  My dad and his siblings were getting older and wanted to make sure the property stayed in the family.

So the LLC was formed and open only to direct descendants of my father’s father… my grandfather. 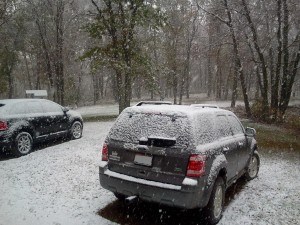 I can easily see in my mind’s eye the first time my father took me on a road trip to see that ten acres he bought.  We parked his big Ford pickup right in the middle of it, on a small drive that the former owner roughed in.  I was eleven, soon to be twelve.

The walks in the woods we took are well remembered, as well as helping build that first cabin by pounding nails where needed.  I recall taking my younger cousins off into the woods while the adults worked.  My cousins and I would explore and hunt small game, then go back to the build site and help with some chores, such as digging a huge pit for the outhouse.

Many were the hikes into the big woods surrounding the cabin.  To this day I have not explored it all, but know well the many horse trails and fire breaks and the parcels that are divided by them.

The woods, the creeks, the fire tower, the river not far away, the hunting.  The smells and sights.  Many memories.  Uncles, cousins, aunts, kids, grand-kids…  memories.

I love that cabin in the woods.